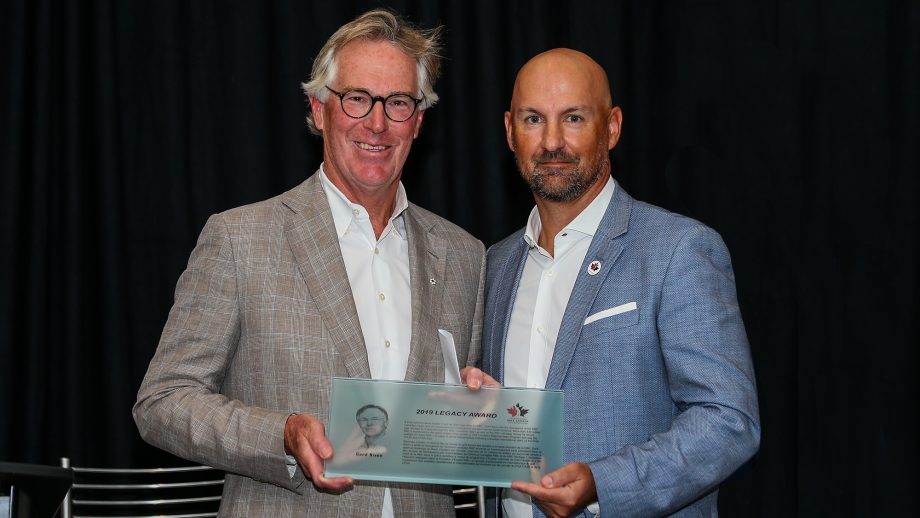 TORONTO (September 12, 2019) –Golf Canada Foundation in partnership with Golf Canada are proud to announce that Gord Nixon has been named the 2019 recipient of the Legacy Award for exceptional contribution to the sport of golf in Canada. The award was presented to Nixon, the inaugural recipient, at Golf Canada Foundation’s signature annual donor event, the Trustee Cup on Monday, September 9.

A truly transformative leader in golf as former chief executive for RBC, Nixon led the resurgence of the RBC Canadian Open and an unprecedented investment in the sport across North America. More than $20 million was donated to charity through the RBC Canadian Open as well as the RBC Heritage during his tenure. RBC’s investment in the game also helped drive growth in Golf Canada’s National Team Program and was the catalyst for Team RBC—a roster of global ambassadors including Canadian and international stars on the PGA TOUR and LPGA Tour.

“It was through Gord’s leadership that RBC set the groundwork to become the most invested corporate supporter of Canadian golf and it is deserving that his vision and commitment to the game be recognized with as our inaugural recipient of the Legacy Award,” said Golf Canada Foundation CEO Martin Barnard. “It is special individuals like Gord, either as corporate leaders or philanthropic champions, that have truly made an impact through their investment in the game.”

Held at Nixon’s home course, Rosedale Golf Club in Toronto, Nixon was joined by PGA TOUR star and RBC Ambassador Graeme McDowell, along with more than 100 Foundation donors and 25 amateur and professional golfers representing Team Canada and all levels of the professional game including the Mackenzie Tour/PGA Tour Canada, Symetra Tour, Korn Ferry Tour, and PGA TOUR. The event raised more than $600,000 to support grassroots programs and develop the next generation of Canadian players.

The 2019 Trustee Cup at Rosedale was the third iteration of Golf Canada Foundation’s signature fundraising event which was previously held at Calgary Golf and Country Club in 2018 and Memphremagog Golf Club in 2017.